October 25, 2020
Home
Words
My Thoughts on the First 2020 Presidential Debate

My first thought of the evening was definitely “oh boy!” because I expected this debate to be an absolute hoot. Between Trump’s smug and unwarranted sense of self importance and Biden’s supposed cognitive decline to be in full display for over an hour and a half, I thought for sure the only thing that could possibly go wrong was absolutely everything. I couldn’t wait for the ride! 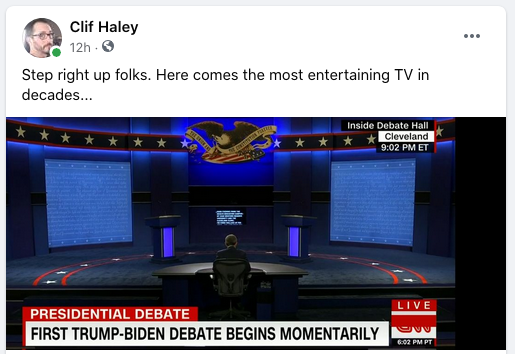 Wait a minute. Where is this cognitive decline of Biden’s I’ve been hearing so much about? He seems to be rather coherent. A little slower paced than Trump, sure, but he hardly seems like a feeble minded dimwit. And why does he keep looking right at me?!

My 11-year-old son summed this thought up for me pretty well when he said, “They’re just acting like kids.” Really, though, I’m not sure where he got this idea. For the most part the debate was only 93% shouting, snipes, school yard insults, and dismissive hand waving.  At least a solid 7% of it was extremely professional thanks to Chris Wallace.

This was originally published in an issue of