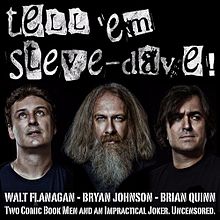 Tell ’em Steve-Dave! (or TESD for short) is a weekly podcast hosted by Walt Flanagan, Bryan Johnson, and Brian Quinn. If any of those names sound familiar then you are more astute than I was when I first discovered the show a little less than a year ago.

I’m a big fan of the TruTV show Impractical Jokers and knowing that the four guys involved – Brian Qinn, Sal Vulcano, Joe Gatto, and James Murry – are not just four random guys thrown together by the network, but are part of a comedy troupe, The Tenderloins, which long pre-dates IJ, I wondered if they might have a podcast. I searched and found Tell Em Steve-Dave! instead which is co-hosted by Brian “Q” Quinn from IJ. The other two guys, Walt Flanagan and Bryan Johnson, are on AMC’s Comic Book Men, a show I had not, and still have not, seen. I thought, “Well, I don’t know who those other two guys are, but I’ll give it a shot…”

Let me tell you something here, and I’m not going to pretty it up for timid ears: I fucking love this goddamn fucking show!

First, let’s get the obvious thing out of the way I’m sure some folks are wondering. “Is this podcast,” I’m sure you folks are wondering, “anything like Impractical Jokers or Comic Book Men?” No. No it’s not. And that is a good thing for a couple reasons: 1) If you don’t like IJ or CBM, there’s a good chance you will like this podcast anyway, and 2) While IJ and CBM topics do come up (these guys are into comic books, so it happens) they come up fairly rarely and merely as an organic part of the conversation at hand. Even when the topic of comic books comes up it’s hardly ever at the in-depth level you’d have to be a long time fanboy to follow. I’m not into comic books, yet I’ve never been lost or turned off when the subject comes up on the show. Occasionally, one of IJ might stop by, but the conversation is, again, most certainly nothing like an episode of Impractical Jokers. Also, unlike IJ and CBM, TESD is R fucking rated, just a like show for grown-ups ought to be for fuck’s sake.

The show is perfectly balanced. Each of these three guys’ individual personalities bring something to the table. There is not a weak link in the chain. Like the IJ cast, these guys are all long time friends long pre-dating the podcast or their respective shows, and it shows in the unmitigated hilarity and rapport that comes across.

TESD is part of Kevin Smith’s SMoDcast Network and can be found on their SModcast page, iTunes, or Soundcloud.

Hell, I love the show so much I even bought a t-shirt!